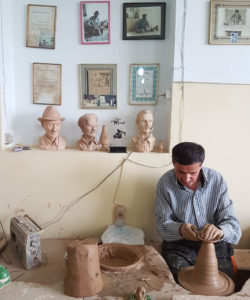 Lalejin potter with busts and photos of ancestor potters.

Here’s a wonderful chance to display your wares at one of the great craft cultures of the world.

Hamadanˊs Cultural Heritage, Handicrafts, and Tourism Organization is holding its annual National Craft Fair this year. Craftsmen from all around the country participate in the event every year. This year considering Hamadanˊs being recognized as the Tourism Capital City of Asia in 2018 and regarding high capacities and the potential of the province being the heartland of a number of crafts like the Global City of Lalejin in pottery, Tuyserkan and Malayer in wood carving, and Hamadan itself in leather works and regarding the tourism attractions of the city like Ganjnameh inscriptions (Archamenian period), Avicenna mausoleum, Alisadr cave (the longest water cave in the world), Alavid dome (Seljukian period), Babataher tomb, the ancient city of Hegmataneh, Hamadan is holding this year ̓s fair internationally.

We are pleased to announce and warmly welcome the participation of our international guests in our 14th annual craft fair. The craft fair will be held at Hamadan International Exhibition from Tuesday, August 21st to Saturday, August 25th from 03:30 to 09:00pm. Set up is on Monday, August 20th at 11:00 and the building closes at 05:00pm.

A booth space will be free of charge. Booth spaces are approximately 3ˊ to 4ˊ wide by 3ˊ deep. The International Fair shall supply the vendors a table and two chairs. Double booth spaces are also available under your former announcement.

Our international guests will reside in a three star hotel to the vicinity of the fair and there will be VIP buses for transportation. Visiting Hamadan tourism attractions like Alisadr cave (the worldˊs longest water cave), Avicenna mausoleum, Ganjnameh inscription (Achaemenian period) and its tourism resort complex, Babataher tomb are also included in the program. We also hope we can host the WCC members while the fair is held.

For participation and more clarification, please contact directly the Deputy of Crafts Ms.Alireza Qasemi at +9834238704 (call or text) or you can email them at mahdi.azimi31@gmail.com